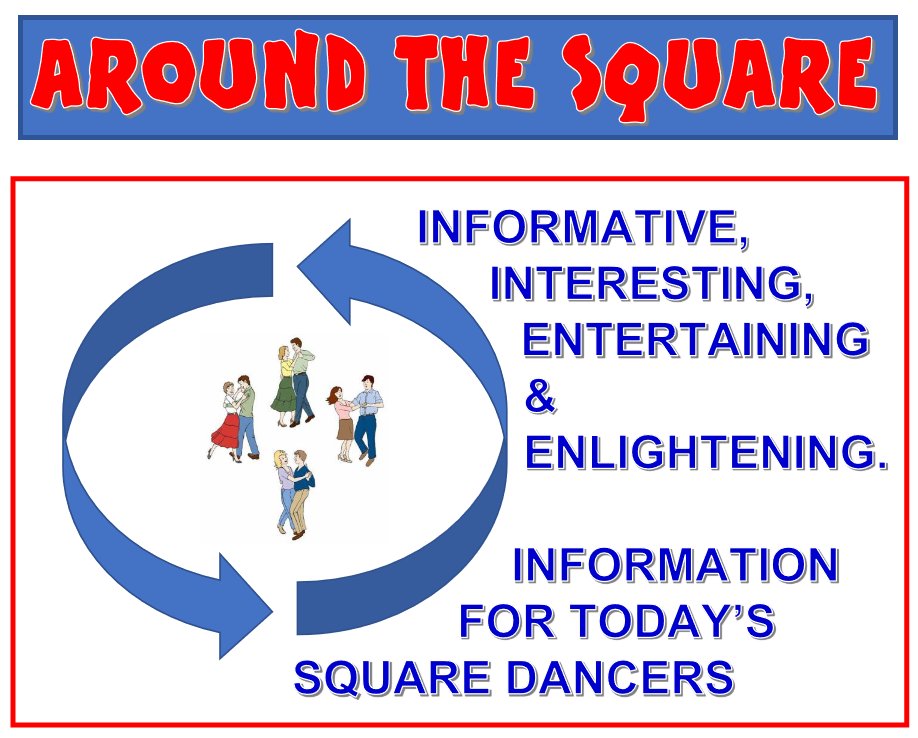 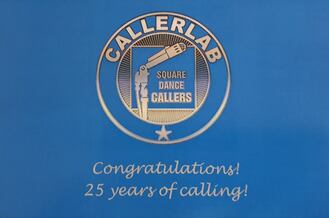 Thursday 18th May 2017
Gary Petersen has spent the week telling his clubs that he will be leaving Qld. after the Shindig this year.
Club members all a buzz with the changes that will be occurring after October 29th 2017.
I will be taking over Upbeat Chaos and Elaine will be taking over the Bribie club.
It will certainly be an interesting time in South East Qld.
Friday 12th May 2017
Stand-In caller for Rambling 8's at Holland Park. 3 squares on the floor most of the night.
Sorry, no line dances, not my thing. Dancers did seem to enjoy the variety of calling.
A change is sometimes as good as a holiday. Dawn Keenan had a call, did a hoedown as well.
Thank you dancers for making me feel so welcome.
Friday 5th May 2017
Visited Rambling 8's at Holland Park. What a great night. 4+ squares for Mainstream & Plus squares.
The occasional Line Dance thrown in. David & I even did a Hoedown together. Dawn Keenan also had a call.
I'll be doing the calling there for the next 2 weeks while David & Faith go on a holiday to the Murray.
Monday 24th April 2017
Check all the "Picture" pages for new pics.
Wednesday 19th April 2017
Uploaded new video clips from The 58th National in April, see them HERE
Thursday 13th - Monday 17th April 2017
Attended the 58th ANSDC in Bendigo, Victoria.
Sunday 26th March 2017
Uploaded a new video clip. From Buderim in January, see it HERE
Wednesday 15th March 2017
Uploaded YouTube video - "I'll Cry Instead" an old Beatles number from 1964.
Monday 13th March 2017
Finished the vocals for a re-release on the Seven Seas 230 - "I'll Cry Instead" an old Beatles number from 1964.
Thursday  23rd February 2017
Added some choreo to SINGING CALLS and HOEDOWNS
Saturday 18th February 2017
Attended and ended up Chairing the 1st Quarterly QCA Meeting. Gary had to leave for a Gig in the Wide Bay Area.
No major changes. I'm no longer Assistant Caller Trainer or on the P & DC committee.
Gary is no longer Caller Training Officer and Kay Walker joins the P & DC.
The Program & Development Committee will elect a Caller Training Officer.
Saturday 21st - Sunday 22nd January 2017 - Steve Turner Caller Clinic
2 great days of Caller Clinic - Steve is a very good Instructor.
How good would you have to be to keep 15 callers in check and on track.
I particularly enjoyed the RH Lady session and the Asymmetrical sessions.
The Saturday night dance saw Steve and most of the QCA callers from the clinic on stage.
Approximately 60 dancers turned up on what was the hottest dance night I can remember.
It did not however curb their enthusiasm,they were on the floor most of the night before the callers were even ready.
Thanks to the QCA and Steve Turner for a great weekend.
End of 2016
Friday 29th December 2016
Added some personal pages.
Monday 12th December 2016
Upbeat Chaos Christmas party - great night of Plus dancing.
Danced 3 squares most of the night.
Many regulars and a few visitors from around Brisbane.
Met an American couple, Dave & Sandy from Seattle, looks like they'll be in Qld. for awhile.
Plenty of supper and good company.
Thanks Gary for a great night.
Saturday 10th December 2016
Hervey Bay Dancers Christmas party - what a great afternoon & evening.
1 1/2 Squares for the afternoon Plus and 3+ squares for the evening Mainstream session.
Had a nice drive to "The Bay", Margaret Baines came up with me.
Also had a bunch of visitors from Maryborough, nice to catch up with them
Janice their Treasurer hosted us at her house for a shower & a meal between sessions.
Glenda & Bev joined us for dinner.
They have a group of newer dancers who haven't finished learning all the moves, but they had fun.
I think the regular dancers also picked up a few moves they hadn't utilised before.
Had an easy drive back. Left home 8.45am Saturday, got back home 2.30am Sunday morning.
A bit tired this morning.
Friday 2nd December 2016
Rambling 8's Christmas party - what a great night.
6 squares in attendance from Beginners thru Plus.
5 Callers, David Pearce, Peter Storey, Dougal Findlay, Dawn Keenan and me.
Plenty of Christmas decorations, Lots of Christmas songs. really nice Christmas Punch.
A few Line Dances, Oodles of Supper. Fabulous Night.
Saturday 26th November 2016
My music guy sent me the music for "Rubber Ball"
A Bobby Vee hit from 1960 - Due for release early in the new year. 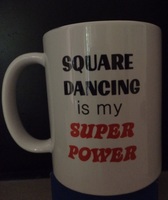 How's this for a cool coffee mug????
One of the girls at work gave it to me as a "Secret Santa"
Monday 14th December 2015 - Upbeat Chaos Christmas Party
Picked up Sheryl & Margaret and headed to Deception Bay.
It was one of those "Where did the time go" nights. 4 squares and some spares.
Gary had me do a couple of brackets. I really enjoyed a good night of Plus choreo.
I even won a raffle prize. That's my last dance for 2015.
Friday 11th December 2015 - Lawnton Demo group final lunch
Margaret has decided to "wind-up" the Lawnton Demo group.
A final lunch at the Pine Rivers Bowls Club and a donation to Charity.
It's been my pleasure to be a part of this group from time to time over the last 10 years.

End of 2014
Monday 15th December 2014 - Upbeat Chaos (Plus) Christmas party
4 1/2 squares in attendance. I danced nearly all brackets.
Quite a few raffle prizes and plenty of supper.
Callers were: Mostly Gary with Elaine & Me.
Just about all Christmas tunes.
Friday 5th December 2014 - Rambling 8's Christmas party
5 1/2 squares in attendance. Beautifully decorated hall, the whole club brought something.
Great lot of Door and Raffle prizes, but I didn't win a single one.
Callers were: David Pearce, Noel Mckenzie, Peter Storey, Dawn Keenan & Me.
Mostly Christmas tunes, but there was a smattering of regular music.
Supper was huge, plenty for everybody.
Thanks to David & Faith and all the Rambling 8's for making Rosalie & I so welcome
Saturday 29th November 2014 - The last 5th Saturday dance at Kallangur
Just on 5 squares in attendance. Margaret was a little emotional, the dance had been running for 23 years.
Personally, I thought it was a good dance, a pity more didn't support it.
But then, I suppose that is why it was the last one.
Callers were: Margaret, Jan, Gary, Glenn & Elaine.
It was a good opportunity to use all those Christmas singing calls.
Monday 17th November 2014 - Plus with Brian Hotchkies at Upbeat Chaos
5 squares in attendance. What a great night. I danced every bracket
Saturday 8th November 2014 - My Birthday
Updated and uploaded more notes about Sight Resolution to the "Notes" page
Saturday 11th October 2014 - Heritage City Hoedowners
Easy Drive to Maryborough, good company again -  Margaret & Elaine.
2 1/2 hours of Plus in the afternoon and 3 hours of Mainstream in the evening.
1 square for the Plus, 2 for the Mainstream.
Great to have David Habler for a call or 2 as well.
The girls had a bracket each as well.
David and I shared a bracket during the night.
The BBQ between sessions and supper were great.
Finished the night with Elaine, Margaret and Myself doing a trio call
Saturday 13th September 2014 - Jills Jive Dance Club (Nundah, Brisbane)
Great night at Jill's Jive dance club. 3 brackets of Square Dancing throughout the evening.
7.30, 8.30 and 9.30pm, 20 mins. each. At least 8 squares on the floor each time, 10 squares at the 8.30 session.
Dancers had a great time, laughter was sometimes louder than my calling. Used very little "Country" music.
Mostly modern Hoedown music, each bracket finished with a partner changing singing call.
The roar of achievement that went up around the hall, when they realised they had gotten back with their original partner, was fantastic.
Jill & Trevor were really happy with the increased numbers that came along just to do the square dancing.
Saturday 6th September 2014 - Hervey Bay Dancers (Fantasy Night)
Nice drive to Hervey Bay, good company -  Margaret & Elaine.
2 1/2 hours of Plus in the afternoon and 3 hours of Mainstream in the evening.
Thanks to Glenda for her hospitality. 1 square for the Plus, 2 for the Mainstream.
Great to have Julie-Anne and Rob from Caboolture drive up.
29th August 2014 - Pine Rivers Senior Citizens
Margaret's penultimate Saturday dance this coming weekend, hope there's a crowd.
(Ended up with 4 squares for the afternoon)
The last one will be the 5th Saturday in November 2014. Let's go out with a blast!!!
Looking forward to "Fantasy" dance at Hervey Bay on the 6th September.
Margaret and Elaine are coming up with me to help with the calling.